Posted by Evan in Uncategorized on December 17, 2015

When I heard there was a new adaptation of Macbeth starring Michael Fassbender and Marion Cotillard, my excitement knew no bounds. Macbeth is one of my favorite Shakespeare plays, it is highly cinematic, Cotillard and Fassbender are great actors, and the news that it would be an old school adaptation set in the 11th century were all highly encouraging.

This was the biggest cinematic disappointment I have ever experienced. The only quasi-redeeming aspect was Cotillard’s performance as Lady Macbeth, and even she could not save the disaster that was the rest of this movie.

First of all, this is not adapted from Shakespeare’s Macbeth; it’s adapted from the Sparknotes version of Macbeth. Several crucial scenes are missing (the conclusion of Macbeth’s dagger soliloquy, all of “Double double toil and trouble,” the exchange between Lady Macduff and her son, and that’s just for starters .) Considering the film is still two hours (roughly the length of the play), the missing scenes are replaced with new lines by the screenwriters quickly filling in any information that is needed, and two LONG battle sequences that frame both ends of the film, both of which are shot and jarringly edited with absurd slow-motion video game like sequences which look terrible. If watching someone else play a video game is your idea of a good movie then maybe you will appreciate this.

So much of Shakespeare’s play is missing that for this Shakespeare lover a suitable analogy would be watching a film adaptation of the Gospels which removes “The Baptism in the Jordan,” “The Sermon on the Mount,” and “The Agony in the Garden.” Or a film of Les Miserables which cuts “I Dreamed a Dream,” “Who Am I?” and “Bring Him Home.”

Speaking of Les Miserables, many people complained (to some degree deservedly) about Hooper’s sloppy editing and camera work, but compared to this, Hooper looks like Orson Welles. Justin Kurzel relies on an overabundance of close-ups, and his idea of quick pacing is to extremely over edit — I’d be hard pressed to name a single shot that lasts longer than 5 seconds. (I think there were two or three, but I couldn’t swear to it.)

For the hype about setting this in the 11th century, the Gothic architecture for the castle looked more 14th or 15th century to me.

As I said, Cotillard is good, but it’s hard to tell because the camera is constantly interrupting scenes by jumping to new shots. Kurzel also doesn’t allow her to become as unhinged as she needs to. She merely becomes wracked with guilt; she never loses her mind. I don’t have any idea what Fassbender was doing. He plays Macbeth as a cipher, which I thought was grossly inappropriate, and he has no progression or descent into evil at all. He recites the lines about Macbeth’s guilt and hesitation, but then carries out the murder of Duncan without any hesitation, and he’s not even shaken by having done the deed. The portrayal of the Macbeths ruined the opposite character arcs that the two are supposed to have as they both lose their minds in different ways.

In fairness, I will add that it probably did not help that I watched the very, very good Polanski adaptation for the first time a few weeks ago.

Posted by Evan in Uncategorized on December 5, 2015 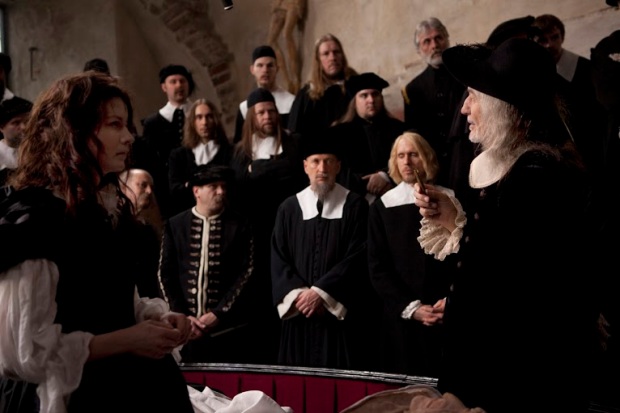 The life of Queen Kristina of Sweden is a fascinating enough topic to make several different films. Mika Kaurismäki’s The Girl King successfully limits its scope to two aspects of her life, but at the same time it seems to be torn between which of the two is the focus of the story. The film is framed by scenes which underscore Kristina’s affinity for the Catholic faith to the dismay of the Lutheran Swedish court, but the majority of the middle of the film is much more interested in her illicit lesbian affair with one of her ladies in waiting.

To the film’s credit it merges those two aspects of Kristina’s life more successfully than one might expect by emphasizing Kristina’s “curious” nature which leads her to be dissatisfied with Luther’s strict theology and interested in fulfilling her unorthodox desires. However, the double meaning of curious (for knowledge and regarding sexuality) becomes laboriously overstated and repetitive as the members of Kristina’s court and the French (read: Catholic) ambassadors say, “The queen is curious,” whenever she expresses interest in something outside of accepted norms. In other words, the word is used to the point of exhaustion.

I actually think the idea of a lesbian affair leading someone to become Catholic is fascinating, and it emphasizes the main mission of the Church: to meet all sinners where they are and bring them into the fullness of truth. Here, yet again, I found the film’s handling of the idea to be more interesting in theory than in execution. The French ambassador, eager to strike a blow against Lutheranism, tells Kristina that becoming Catholic would enable her to continue fulfilling her lesbian desires (in the seventeenth century, I seriously doubt anyone of any faith would say that). Rene Descartes (Kristina’s favorite philosopher) then says that those desires are not Christian, but further exploring the implication of those lines seems to be outside the film’s interest.

I am aware that for everything that I’ve complimented I have then criticized it, which might be making the film sound worse than it is. Director Mika Kaurismäki keeps the film thoroughly watchable through his skilled framing which gives a sense of the austere nature of the Swedish court as well as Kristina’s thirst for knowledge. An early shot of the young queen being given a physical examination in front of the entire court of men clearly establishes the sexism and secondary role of women which Kristina will challenge. The set design also convincingly portrays seventeenth century Sweden both in the palace interior and winter countryside.

However, I once again am going to turn around and critique the film. As skillful as the camera work is, the script is weak, with lines of dialogue either painfully on the nose or clichéd ideas from freshman philosophy. It does not help that some of the delivery is very stilted, but that may be because I watched the English version instead of the Swedish version, and it seemed that English was not a first language for a couple of the actors, notably Malin Buska who plays Kristina.

The Girl King is not a bad film. It’s a fascinating one in which it’s easy to see the makings of a great film from the story of Queen Kristina, a legacy this film touches upon, but does not live up to.

Content Advisory: Brief nudity, depiction of a lesbian affair, a threat of rape, an off-screen abortion, medical bloodletting and surgery — nothing particularly graphic.